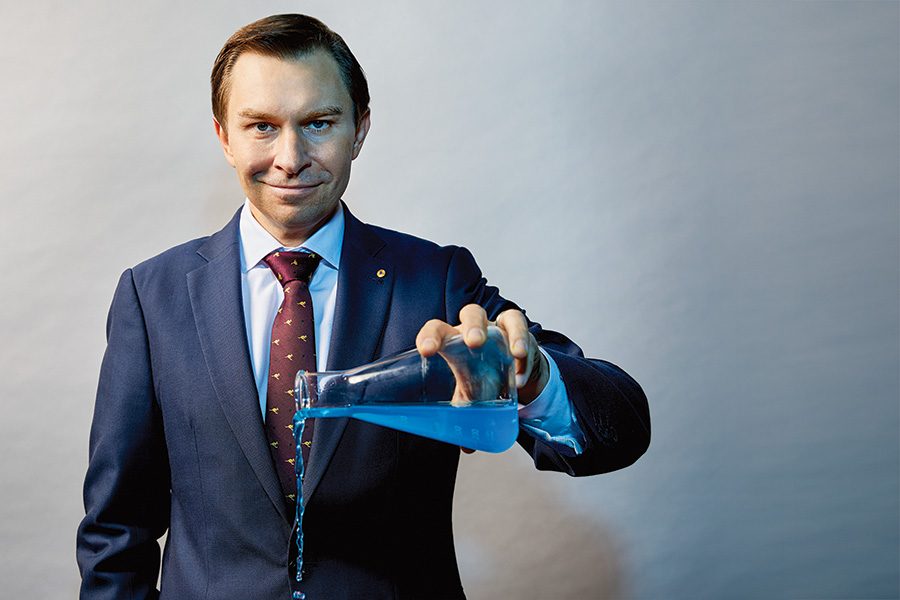 Dr. David Sinclair’s name comes to mind when talking about aging, healthy lifespan, and longevity genes. David Sinclair, an outstanding scientist at Harvard University, is famous for his extensive work in longevity science. He believes aging is not compulsory, it can be slowed down and even reversed.

David Sinclair’s vision of aging is simple: aging is a disease, that can be prevented or cured through an active lifestyle, balanced nutrition, fasting, and supplements.

This article sheds light on David Sinclair’s family, early life, works, and awards. You will also learn facts about his lifestyle and how he maintains his youthfulness.

David Sinclair is a 53-year-old scientist at Harvard Medical School whose grand-grandparents immigrated from Hungary to Australia. David Sinclair grew up in a family of four- his father, mother, brother Nick, and him. One of the bright characters in David Sinclair’s family is his grandmother, with whom he had a special connection and memories.

At the age of 30, David Sinclair married a German scientist, Sandra Luikenhuis with who they have 3 children. Sandra is a Harvard professor whose academic career is focused on Molecular Biology and Genetics. However, their marriage ended with a divorce in 2022, David Sinclair talks about his wife taking the same path as him- pursuing lifestyle changes and taking longevity supplements for a longer lifespan. David Sinclair and his wife are on the list of the 100 most influential people in the world. 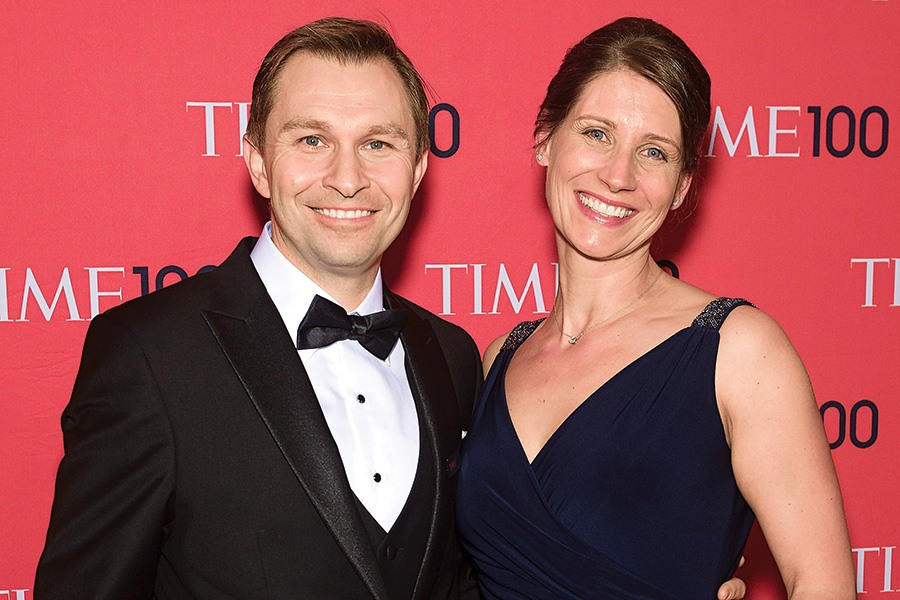 Sinclair’s mother, Diana Sinclair, was diagnosed with lung cancer at the age of 53. After this diagnosis, she had one of her lungs removed and conditioned to live 20 years with one lung. However, to this day, David Sinclair considers removing the respirator from her one of the biggest mistakes he made. As soon as the respirator was removed, she passed away in a few minutes at the age of 72.

During his eulogy, David Sinclair remembered: “Many, if not all of us, never expected such a small, petite person like Mom to survive long. If she had died then [at the age of 50], yes, I would tell you to go ahead and cry. But she didn’t. She had enormous strength. She broke the medical record for life lived on one lung”.

David Sinclair talks about his father, Andrew Sinclair, proudly and calls him his 82-year-old hero. David Sinclair’s father does not look or feel his age while staying active, mindful of what and when he eats. Andrew Sinclair is cautious when it comes to food and prefers home-cooked dishes or restaurants serving healthily cooked meals.

Sinclair’s father takes long walks every morning, and exercises for 70-90 minutes at the gym twice a week doing cardio, pilates, and weight exercises. Exercising and healthy eating are crucial for a longer lifespan, yet not enough on their own, let alone when you are in your 80s. For this reason, Sinclair’s father strictly follows his longevity supplement stack, which includes

One of the main aspects that Sinclair’s father considers to benefit his longevity is good luck as none of his relatives lived to be 80. Sinclair remembers receiving an award in Washington D.C. where his father was present with his grandchildren and their mother. “This is what longer life is all about,” says Dr. Sinclair “having your parents there for life’s important moments”.

When it comes to aging, everyone is reluctant to face it. And it is completely justifiable as at the back of our minds we believe that aging is accompanied by hundreds of health complications. If you would ask people around you if they would like to live till 80 or past, you would most probably listen “no”. The reason is the fear of frailty, low energy, and cognitive decline.

However, ever-evolving longevity science is getting closer to helping people achieve 100 and beyond without feeling their age. David Sinclair also believes that even if we are not yet there, we are moving in the right direction toward living a healthy life in our older age. 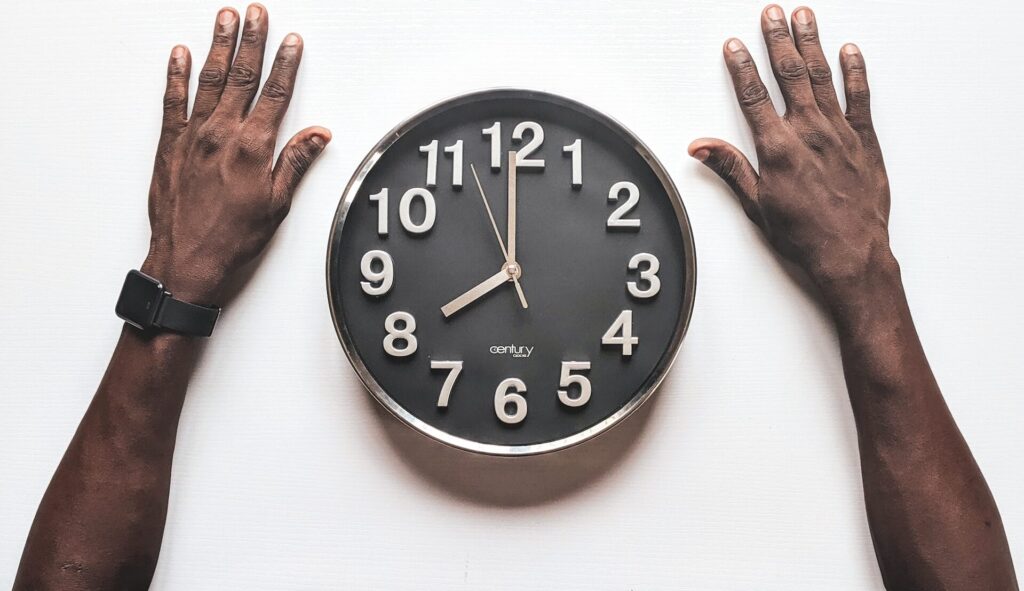 There are two different clocks counting our age- chronological which is the number of lived years, and biological- the state of your organismal health. David Sinclair is 53 years old, yet he feels in his 30s and according to the biological age tracker, he is now 33 years old biologically. How?

David Sinclair’s age test is a simple evidence-based digital platform that gives nutritional and lifestyle recommendations to enhance longevity. In one of his interviews, Sinclair talks about the novel technologies helping to shave off decades from one’s biological age.

“I was shocked how well just the simple changes to what I ate and how I lived were able to have such an age-reversal effect. I would have thought that I’d need a potent medicine that we were working on, but I didn’t need that. There’s a lot more that you can do than I think a lot of people realize. But, it really only works, as I’ve witnessed, if you have the feedback.

If you go on a diet or you take this or that, or you eat certain foods, you really don’t have any good way of knowing if it’s working. We just hope. And that’s what I did until InsideTracker came along. But when InsideTracker was actually showing me that what I was doing was not enough, that in fact, maybe some of what I was doing wasn’t great for me, I was able to correct that and it’s like I’ve got another 10 years of research in me”.

Although Harvard professor David Sinclair knows that none of us can get younger chronologically, he strongly believes that “biological aging is malleable” and can be reversed. The main aspects are healthy nutrition and an active lifestyle, which can help prolong healthspan. Plus, Sinclair is sure that science-based longevity supplements are important aspects if one is looking for the way to the fountain of youth.

Another essential factor for David Sinclair’s aging theory suggests is the psychological perception of time. Sinclair believes, and you may also agree, that the older we get, the faster time flies. Hence, concluding from numerous feedback from his colleagues and famous people, mindfulness and living in the moment helped them feel the time slowing down.

While Dr. Sinclair and his lab eagerly run tests and studies to find the genes contributing to longevity, he is already guaranteed that with the right lifestyle decisions, a longer healthspan is inevitable. After succeeding in reversing the aging hair and bones of mice in his lab, Sinclair notes that “what worked with mice, is achievable with humans”.

D. Sinclair obtained his Ph.D. in molecular genetics and BCs in biochemistry from the University of New South Wales. While in Australia, he won Australian Commonwealth Prize after which he continued his studies in aging science aiming to regulate genes in yeast.

Following Leonard P. Guarente’s advice, David Sinclair applied for a postdoctoral position in Guarente’s lab at MIT where he studied longevity genes called Sirtuins. After working four years in the lab, in 1999 Dr. Sinclair was hired by Harvard Medical School where he started his own lab.

Later, David Sinclair got funded by Paul F. Glenn to establish the Paul F. Glenn laboratory at Harvard to study the biological mechanisms of aging. At the present moment, Sinclair serves as a co-director in the lab along with Bruce Yankner.

Among several laboratories and companies where David Sinclair was on the scientific advisory board or co-founder, he is most famous for his first pharmaceutical company. The company called Sirtis was founded by David Sinclair and 5 other entrepreneurs.

Studies of Sirtuin genes in David Sinclair’s lab were redirected into further development in the Sirtis pharmaceuticals. This is when the compound Resveratrol first got its popularity as a longevity supplement activating Sirtuins. Sinclair was assured that Resveratrol is a “molecule closer to miraculous one that may be used to slow down aging, cure heart disease, and prevent cancer and stroke”.

The company was later sold to GlaxoSmithKline in 2008 and later shut down due to unsuccessful operation. During a later period, David Sinclair’s name became popular after the FDA and MetroBiotech announcements around NMN supplements to be titled as a prescription drug.

One of David Sinclair’s significant contributions to longevity science is his bestseller book written in 2019 called “Lifespan- why we age and why we don’t have to?”. Sinclair’s book became a bible for people aiming for longevity and stable health in their later years.

In addition to his work, David Sinclair is actively sharing his vision on aging and longevity during conferences. Starting in 2000, he distributed more than 250 speeches on the topic of aging and healthspan, also was invited to numerous podcasts including Andrew Huberman lab, Lex Fridman, Rhonda Patrick, and many others.

Plus, in 2011, to share more insight into aging science, his lifestyle, and supplementation habits David Sinclair started his Lifespan podcast with co-host Matthew LaPlante. 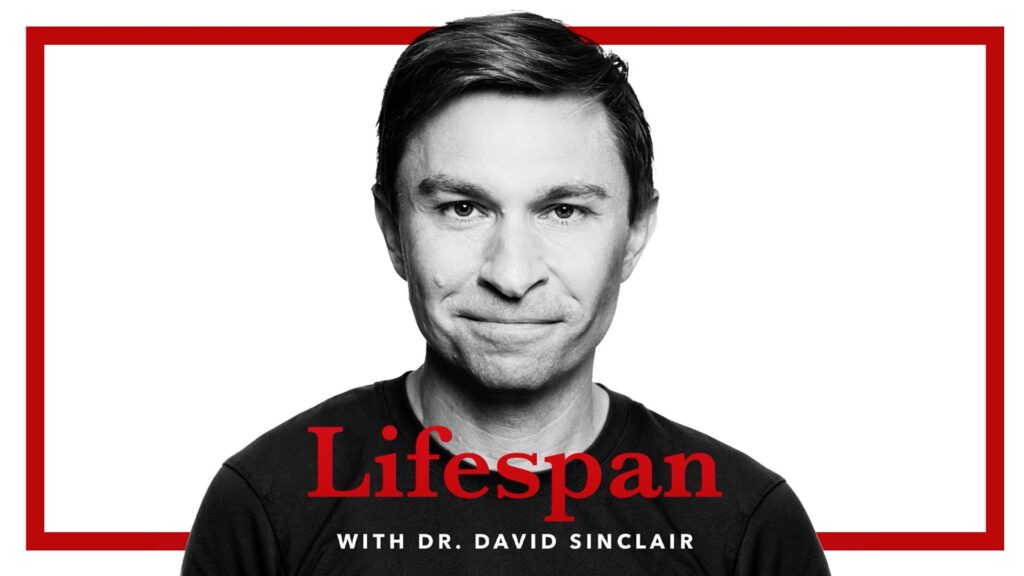 David Sinclair developed his lifestyle patterns to strengthen his health and add up years to his life. Supplements David Sinclair takes are mentioned in his book “Lifespan” page 304. Taking into account, he has bad genes and stories of cancer and stroke in his family Sinclair takes conscious choices regarding his supplements. Among regular vitamins, his longevity stack contains Metformin, Resveratrol, a small dose of Statin, and NMN supplements.

Aside from the supplements, Dr. Sinclair shares 4 main healthy approaches for his healthspan.

1. David Sinclair’s primary lifestyle intervention is being active. Like his 82-year-old father, Sinclair keeps moving and walks at least 40 mins a day. Here is what he says being active will grant you.

“The good news is that we don’t have to exercise for hours on end. People who run four to five miles a week (for most people, that’s an amount of exercise that can be done in less than 30 minutes every other day) reduce their chance of death from a heart attack by 40 percent and all-cause mortality by 45 percent”.

2. Eat less often. This is David Sinclair’s motto he shares with people aiming for longevity through fasting, calorie restriction, and less inflammation. Professor Sinclair practices intermittent fasting (IF) almost every day when he also misses his lunch due to being busy in his lab. David Sinclair’s diet consists mainly of vegetables, fruits, leaf greens, nuts, and rarely some meat.

This is what he says about IF. “There is no “best diet.” What works for someone may not work for another. We are all different, with different ages, circadian rhythms, jobs, body compositions, microbiomes, stresses, and wants. No matter what you do, a little fasting goes a long way”.

3. Eat stressed plants, vegetables, and fruits. The products that were harmed by worms, have darker leaves and are more vibrant in color containing most of the antioxidants.

“Over the long-term, this provides us with health and longevity, the same way intermittent fasting and exercise are thought to. In fact, they activate the same hormetic pathways”.

David Sinclair’s investment in the science of aging is huge and continues to grow thanks to the thorough studies in his lab at Harvard Medical School. Besides educating the enormous audience on the biology of aging, he shares his lifestyle interventions with everyone to use as their own.

Living his healthiest life in his 50s, David Sinclair praises the new technology and scientific enthusiasm bringing the human lifespan of 100 and more a few steps closer. 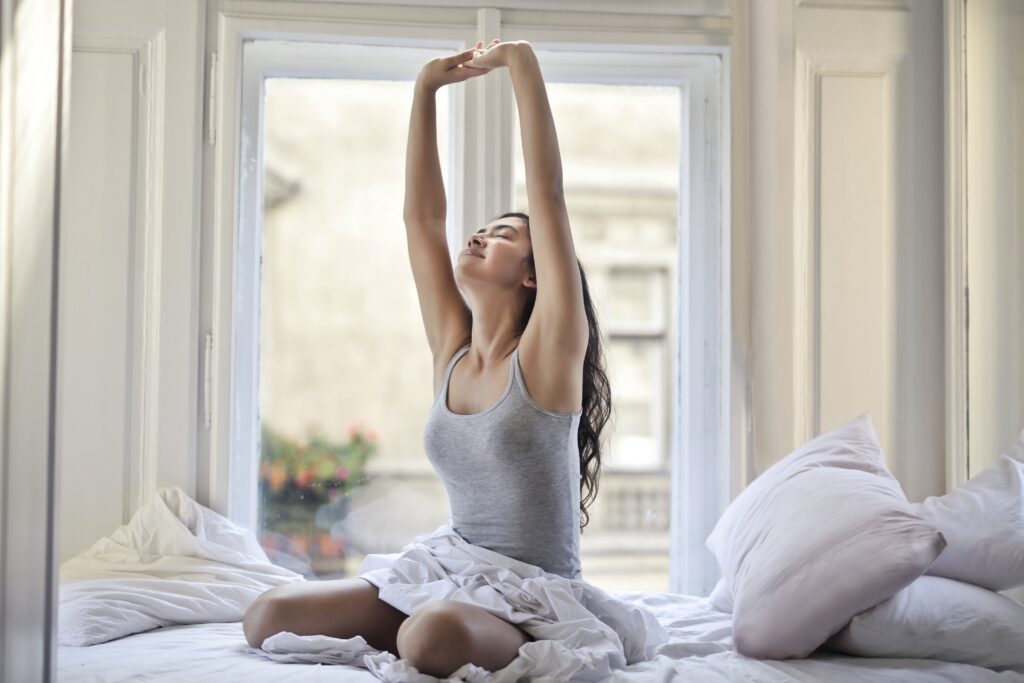 How Are NAD+ And Vitamin B12 Connected To Better Sleep? 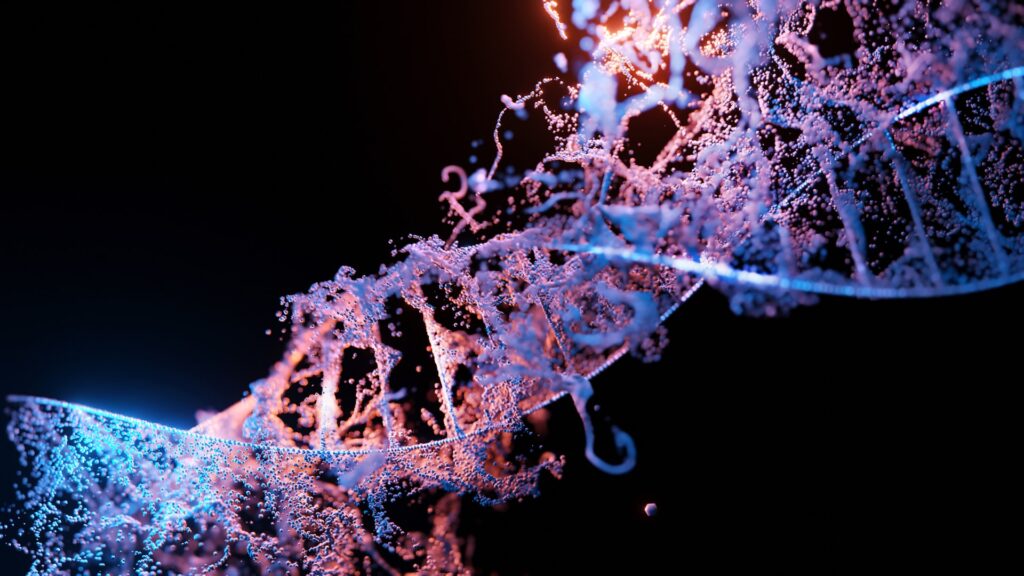 Biohacking At 39 For Living 120 And Beyond 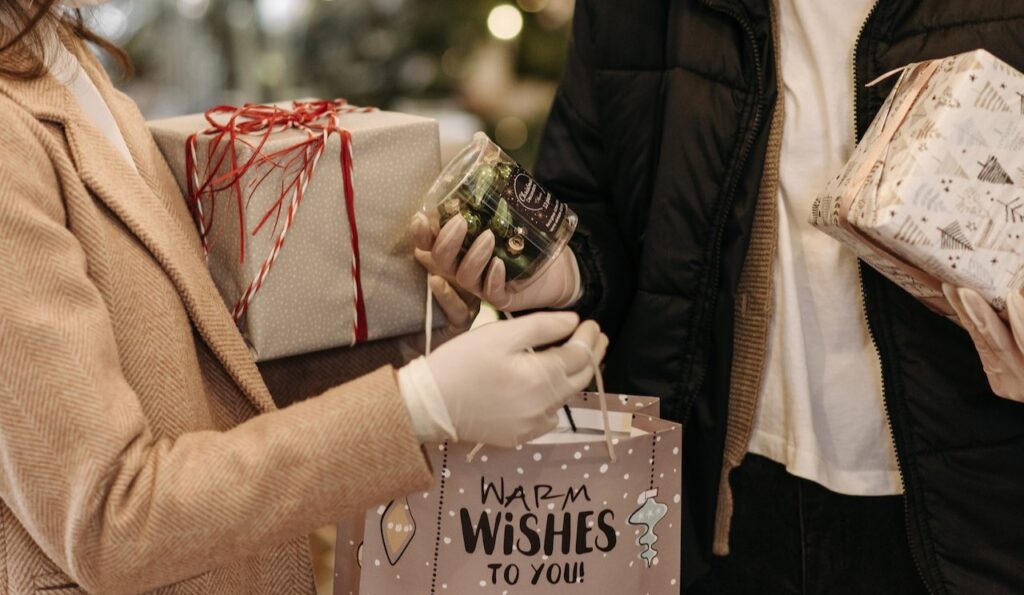